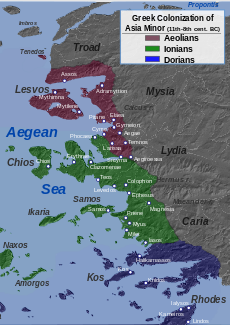 Ionia (/aɪˈoʊniə/; Ancient Greek: Ἰωνία /i.ɔː.ní.aː/, Iōnía or Ἰωνίη, Iōníē) was an ancient region on the central part of the western coast of Anatolia in present-day Turkey, the region nearest İzmir, which was historically Smyrna. It consisted of the northernmost territories of the Ionian League of Greek settlements. Never a unified state, it was named after the Ionian tribe who, in the Archaic Period (600–480 BC), settled mainly the shores and islands of the Aegean Sea. Ionian states were identified by tradition and by their use of Eastern Greek.

Ionia proper comprised a narrow coastal strip from Phocaea in the north near the mouth of the river Hermus (now the Gediz), to Miletus in the south near the mouth of the river Maeander, and included the islands of Chios and Samos. It was bounded by Aeolia to the north, Lydia to the east and Caria to the south. The cities within the region figured large in the strife between the Persian Empire and the Greeks.

According to Greek tradition, the cities of Ionia were founded by colonists from the other side of the Aegean. Their settlement was connected with the legendary history of the Ionic people in Attica, which asserts that the colonists were led by Neleus and Androclus, sons of Codrus, the last king of Athens. In accordance with this view the "Ionic migration", as it was called by later chronologers, was dated by them one hundred and forty years after the Trojan War, or sixty years after the return of the Heracleidae into the Peloponnese.