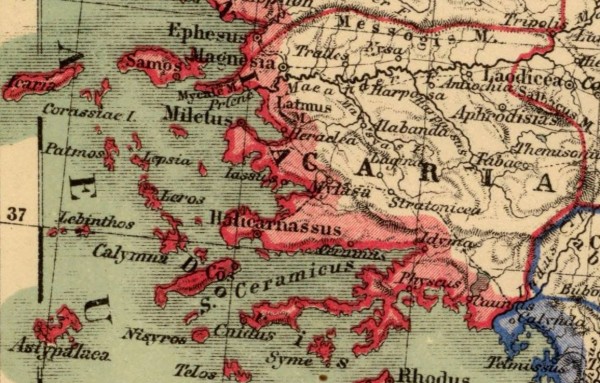 Caria (/ˈkɛəriə/; from Greek: Καρία, Karia, Turkish: Karya) was a region of western Anatolia extending along the coast from mid-Ionia (Mycale) south to Lycia and east to Phrygia. The Ionian and Dorian Greeks colonized the west of it and joined the Carian population in forming Greek-dominated states there. The inhabitants of Caria, known as Carians, had arrived there before the Ionian and Dorian Greeks. They were described by Herodotus as being of Minoan descent, while the Carians themselves maintained that they were Anatolian mainlanders intensely engaged in seafaring and were akin to the Mysians and the Lydians. The Carians did speak an Anatolian language, known as Carian, which does not necessarily reflect their geographic origin, as Anatolian once may have been widespread. Also closely associated with the Carians were the Leleges, which could be an earlier name for Carians or for a people who had preceded them in the region and continued to exist as part of their society in a reputedly second-class status. Cramer's detailed catalog of Carian towns in classical Greece is based entirely on ancient sources. The multiple names of towns and geomorphic features, such as bays and headlands, reveal an ethnic layering consistent with the known colonization.
Coastal Caria

Coastal Caria begins with Didyma south of Miletus, but Miletus had been placed in the pre-Greek Caria. South of it is the Iassicus Sinus (Güllük Körfezi) and the towns of Iassus and Bargylia, giving an alternative name of Bargyleticus Sinus to Güllük Körfezi, and nearby Cindye, which the Carians called Andanus. After Bargylia is Caryanda or Caryinda, and then on the Bodrum Peninsula Myndus (Mentecha or Muntecha), 56 miles (90 km) from Miletus. In the vicinity is Naziandus, exact location unknown.

On the south of the Ceramicus Sinus is the Carian Chersonnese, or Triopium Promontory (Cape Krio), also called Doris after the Dorian colony of Cnidus. At the base of the peninsula (Datça Peninsula) is Bybassus or Bybastus from which an earlier names, the Bybassia Chersonnese, had been derived. It was now Acanthus and Doulopolis ("slave city").

South of the Carian Chersonnese is Doridis Sinus, the "Gulf of Doris" (Gulf of Symi), the locale of the Dorian Confederacy. There are three bays in it: Bubassius, Thymnias and Schoenus, the last enclosing the town of Hyda. In the gulf somewhere are Euthene or Eutane, Pitaeum, and an island: Elaeus or Elaeussa near Loryma. On the south shore is the Cynossema, or Onugnathos Promontory, opposite Symi.

Then follow some cities that some assign to Lydia and some to Caria: Calynda on the Indus River, Crya, Carya, Carysis or Cari and Alina in the Gulf of Glaucus (Katranci Bay or the Gulf of Makri), the Glaucus River being the border. Other Carian towns in the gulf are Clydae or Lydae and Aenus.